Jazz Tap Artist & Choreographer
Sarah Petronio was born in India, immigrated to New York at the age of 19 then moved to Paris where she met, befriended and apprenticed with Tap Legend Jimmy Slyde becoming his dancing partner for a few years. The duo performed their tap and jazz concert “It’s About Time”© at concerts and jazz festivals throughout Europe. Sarah introduced Rhythm Tap to French audiences and created the Tap Dance Department of the American Center in Paris.

Sarah has received :
2003 Moscow Tapparade Award for her Contribution to the Art of Performance and Excellence of Teaching Tap Dance in Russia.
2004 Lexington Tapestry Award for Teaching with Passion, Dedication and Inspiration.
2005 New York Tap City- Hoofer of the Year Award.
2007 Soul to Sole Tapestry Award for her Timeless Dedication to the Art of Tap Dance.
2007 Sarah conducted the prestigious “La Grande Leçon” – a master class destined to share a master teacher’s creative process and teaching methods with a live audience for archival purposes at the National Dance Center of France.
2011 Tradition in Tap Award for Outstanding Achievements and Significant Contribution to the Art and Tradition of Tap Dancing (New York)

Sarah has appeared in :
“Honi Coles, A Class Act”,”Les Claquettes! Quel Pied!”, “Thinking on Their Feet – Women of the Tap Renaissance” (Jenai Cutcher) as well as in several televised documentary films on Tap Dancing in France. She has been featured in programs with Radio France, France Culture, TSF Jazz…

“Sarah Petronio is one of our veritable jazz tap dancers whose musicality, phrasing, intricate rhythmic motifs, swing, and insistence on listening to and working with jazz musicians in performance truly distinguish her as a jazz dancer. She blurs the boundaries between the music and dance, refusing that the music be mere accompaniment. Her ethos of improvisation, and the way in which she listens to and inserts herself into the musical ensemble is similar in practice to the great Baby Laurence– though her sound and her rhythmic sensibilities are totally her own. She is an original jazz tap dance artist”.
– Constance Valis Hill, dance historian, USA 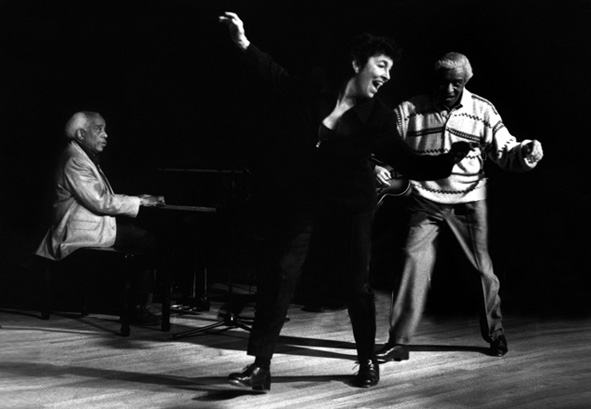